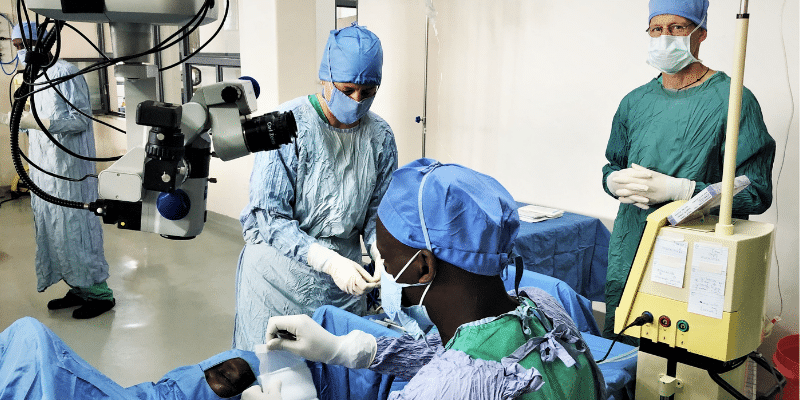 In the fight against blindness in the countries of the global south, the focus is on cataract surgery. In four out of ten cases, cataracts are the cause of blindness. An operation in which the clouded lens is exchanged is successful in many cases and restores people's eyesight. That is why we have been supporting the establishment of eye stations and the training of cataract surgeons for many years.

Cataracts are the most common cause of blindness in African countries

There are different ways to operate on a cataract. The method common in Germany - phacoemulsification, or shortly phaco - has so far hardly been used in African countries. This is due to the higher costs per procedure due to the consumables, but also to the lack of training opportunities. Many surgeons fly to India for training: the technology is already widespread in Asia, but only few doctors from African countries can afford training there. So while in many countries around the world the clouded lens is liquefied and removed using ultrasound, in the sub-Saharan Africa region, the lense is replaced manually. Hereby, it is beneficial if surgical specialists can choose between both methods. Manual intervention has proven its value for old and very hard cataracts. In other cases, especially with children, young people and less advanced cases, the phaco method allows more precise work and can lead to better results.

Choice of the surgical method in the interests of the patient

African ophthalmologists want to learn and practice this method. With the “African Phaco Project”, (DBHW) German Aid for the Blind supports this goal. Together with the Rwanda Charity Eye Hospital near the capital Kigali, we are planning to train specialists in this method - in East Africa and close to the people. An experienced surgeon works in the Rwanda Charity Eye Hospital who not only masters the phaco technique, but also the full range of operational skills. Phaco is usually used in everyday work. The decision of the surgical method depends on the requirements of the treatment and the question, which one will lead to the best result. As a first step, we supported the clinic in purchasing a new phaco machine. This new model works with sterilisable surgical material, which can significantly reduce the costs per operation - making the procedure attractive also in low-income countries. By expanding the capacities in Kigali, an apprenticeship opportunity in East Africa for the roughly two-year apprenticeship should then be created. We would particularly like to thank the team at the Walsum Eye Clinic, which provided significant support for the purchase and transport of the phaco machine.